Inakadate is a village in Aomori Prefecture and a population of 8000. Since 1993, the people of Inakadate began creating rice paddy art to promote tourism and revitalize the area. Over time, the artworks became more elaborate and for two months each year, Inakadate becomes a tourist hotspot in Aomori. Rice paddy art is created at two fields and this year’s topic were two famous Hollywood movies: Star Wars and Gone With The Wind.

I started my trip in Hirosaki on the 5th of August. Hirosaki Station is the terminus of the Konan Railway Line, connecting Hirosaki with Inakadate and Kuroishi. From April to November, the train stops at the seasonal Tamboato Station which is located next to the first rice field. From the station you can easily see the tower built for the festival:

Rice field art is best viewed from a vantage point. In the case of Inakadate’s rice art, the planting of the rice is planned beforehand using a computer. The tower located next to the rice field is the only way to truly see the artwork – from the ground, you’ll only get a vague idea about the picture:

Entrance to the tower is 200 Yen and the lines were relatively short. 2015 theme was “Droids of Star Wars”, showing C3-PO, R2-D2 and the new robot which will appear in the next Star Wars movie out in December. Star Wars is in fact experiencing a revival in Japan this year with a Star-Wars-themed float at Aomori City’s Nebuta Matsuri – which wasn’t allowed to join the parade but could still be viewed – and the opening of a special floor dedicated to Star Wars merchandise at a toy/figure shop in Tokyo. 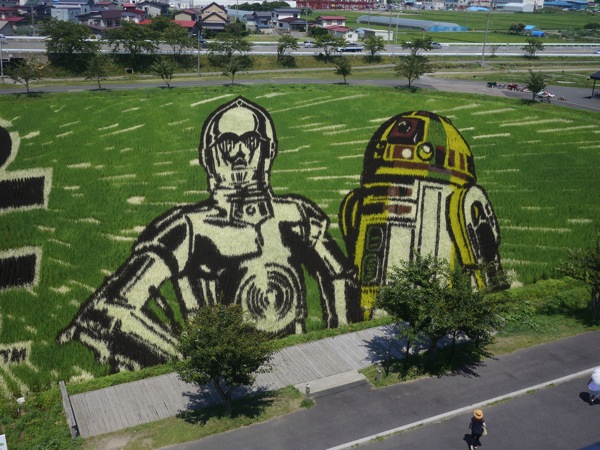 The two rice paddy art fields are connected with a free shuttle bus. This is a small shuttle bus, with room for only about ten people. Make sure to line up early enough to get a seat. If you’ve some time to spend, both sites have a playground, snack and souvenir shops and a restaurant.

The second site is located near a school and I expected lines to be about the same. I was proven wrong – waiting time was about one hour before I could get up the tower and take my photos of Clark Gable and Vivien Leigh as rice art: 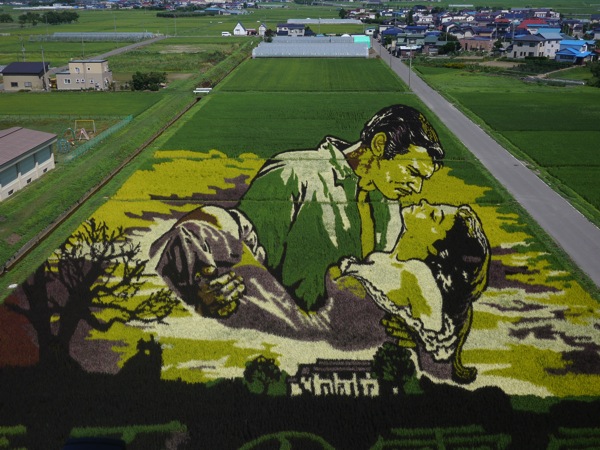 How does it look from the ground? Without drone support, you won’t see much of it:

While some other villages in Japan started creating rice paddy art too, Inakadate’s festival is the most famous one. This was my second time at the festival and the first time I visited both fields. The festival has a website (in Japanese) which contains an image gallery showing the progress. While you could make out the outlines in mid-June, it takes another month for the rice art to fully grow.

My recommendation is to combine Inakadate with a visit to the Nebuta Matsuri in Aomori or Hirosaki as both festivals are held in early August, when the rice field art is fully grown.

How to get there: From Tokyo, take the Tohoku Shinkansen to Shin-Aomori and change to a local train bound for Hirosaki. At Hirosaki Station, take Konan Line to Tamboato Station (23 min., 430 Yen one way).