There is the legendary rivalry between Oxford and Cambridge which is well known even outside of Britain. In Korea there is a similar rivalry between Yonsei and Korea University, both are in the top-3 of Korean universities (also called the “SKY” universities: Seoul, Korea, Yonsei). Once a year there is a big event where teams from both universities face each other. Spanning two days, sports events include ice hockey, baseball, rugby and soccer. 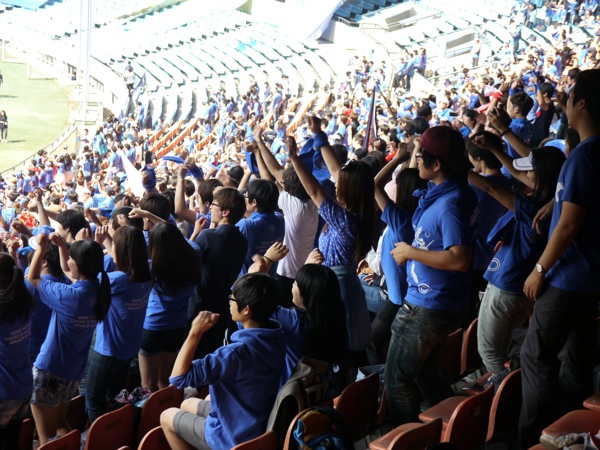 Curiously, the event is not announced on the front page of Yonsei’s homepage, nor do the teachers at the Korean Language Institute tell their students about it. If you study Korean at the KLI you may feel as if your part of the university yet you are not. I think a lot of potential is wasted by keeping KLI students in their small little KLI world.

There is not much info about YonKo (or KoYon, they take turns) in English and the Yonsei homepage was useless when I tried to find out the schedule. I finally found it on the Akaraka website.

YonKo is free of charge and they didn’t even check whether you belong to the university or not. If you are an exchange student and member of the Yonsei Mentors Club you will likely receive a message before the event, since they organize bus trips to the event. If there is no space for you, no problem: Most of the events are at Jamsil Sports Complex (subway line 2, station “Sports Complex”) which is in the South-East of Seoul. Subway line 2 is the green circle line, it takes about 45 minutes from Sinchon station to Sports Complex.

I went to the rugby game,mostly because I liked the movie Invictus which I saw in Tokyo. The match started at 11 and the stadium was not full. While the match was going on, the colorful dressed cheerleaders of both teams were dancing to their respective school’s songs. Red is Korea Universities color, blue is for Yonsei. Most fans already come to the stadium in proper attire, making it very easy to find the venue.

Interestingly, the cheerleaders didn’t react to the game at all. I’ve watched a basketball game in Seoul where the guy on stage was quickly reacting to the game depending if the team was on the defense. That wasn’t the case at the rugby game – the cheerleaders performed song after song as if it was still pre-game time. I felt sorry for the guys in the back playing rugby – they might as well play hopscotch, no one would notice! Except the press of course.

The cheerleaders are amazing though and probably more famous than any of the rugby team members. There is a clear hierarchy visible on the costumes. The leader of Yonsei’s cheerleaders often bends his body to make the crowd cheer harder (for the cheerleaders, I guess). His second-in-command also took the stage at the KLI festival.

They have a couple of songs to sing which are not enough for the whole game so they will just sing them again. During the break, they have a bigger show.

Overall, it’s always nice seeing the Yonsei cheerleaders (note that they are very different from cheerleaders in the US) and it’s a great especially if you come in a group. As for the sports – well, maybe rugby isn’t that important to them but if they just need a background for the cheerleaders, why not dress them up colorfully too?

Or let them play hopscotch instead.