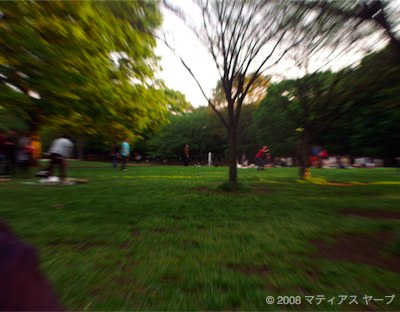 The first “outside” meetup of the JLPT study group wasn’t that successful (it rained), but today the weather was ok. The place of choice was Yoyogi park, the meeting point was at Harajuku Station, which, as the organizer found out, wasn’t the wisest choice 😉 But I’m not that hard to spot and there aren’t that many coming to the meetups anyway. It will probably change once people realize they only have a month to memorize the 1000+ Kanji they are expected to know in the test 😀

Anyway, there were quite a few people in the park who enjoyed the few remaining cherry blossoms. The Japanese really know how to organize their park gatherings, some even brought small tables. One group fifty meters away from us was exceptionally large and was organized via Mixi, Japan’s biggest, yet still invite-only social network.

Oh, and Wye-Khe is still waiting for the iPhone coming to Japan. Although it would be a shame to see his somewhat retro cell phone/battery combination retiring. This could have been the Enterprise, had cell phones be available 40 years earlier 😉